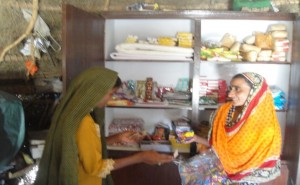 Sanghar District is situated in the east of the province and borders Rajistan desert in the east. It is bounded with Khairpur and Nawab Shah in the North, Tando Allahyar and Matiari in the west and Umerkot and Mirpur Khas in the south. It is divided into three Natural regions;

The life and livelihoods vary from one Natural region to another. Sanghar district has an extreme climate, cold and winter and hot in summer. The climate is healthy and helps grow crops, trees, plants and grosses. Climate and land characteristics play an important role in the development and progress of every region. Sanghar is the region of irrigation canals, desert and wetlands. Two major canals Rohrri and Jamrrao irrigate the lands. Mithrrao and Khipro Canal (Baan Canal) also irrigate a large portion of arable land. Chotiaryoon reservoir is constructed over an area of 450000 acres of land (100 square kilometers). It supplies water to Nara Canal during winter (dry season).

The majority of people depends for their livelihood on agriculture, livestock, labour and allied services. Some people are engaged in government and private jobs, trade and business. There are many shops, hotels, CNG and petrol stations, Paan Berri cabins in Sanghar and all towns of the district.

The geographical area of the district is 2515501-17 acres; the total cultivated land in the district is 1021804-26 acres. The total uncultivated land is 1430675-8 acres, land under lakes, canals and ponds 8830-6 acres. Sanghar is one of the rich districts of Sindh in terms of cotton produce. The land owners are rich and engage many peasant families as tenants or sharecroppers. A considerable proportion of population is engaged in fishing, forestry, government and private employment, hotels, shops, cabins, CNG and petrol stations. There are cotton ginning and oil extracting factories, Sugar Mills , Juice factory, match making factories, power looms and cottage industry. Despite prosperity in the district there is an unemployment and poverty. Even within the bounds of the district many poor and poorer households are unable to afford two time meals. The children suffer from hunger, malnutrition, diseases and ignorance. People continue to live a life which was laid by their fore fathers. With the passage of time changes have occurred in almost every sphere of human endeavors in economic and social status of society. The people in rural localities find it hard to get any jobs. And thus suffer hardships due to their poverty.

Since SDF is a local organizational knows the conditions very well and realizes the challenges faced by the people in face of poverty livelihood destruction. The construction of Chotiaryoon reservoir was a severe blow to the local economy of Chotiaryoon dam area. The reservoir covers an area of 405,000 acres. As a result of dam four major livelihoods of the local people were destroyed:

The people who were uprooted from the land of their clans were adversely affected economically, socially and culturally. SDF focused their attention on rehabilitation and proper resettlement of affected communities. And thus offered some programmes to strengthen local economy. After advocacy and lobbying with other NGOs, SDF succeeded in designing short term projects as support interventions for immediate restoration of subsidiary occupations.

SDF plans to develop farms at the outer fringes of desert. Each farm land consisting of at least 2 acres, each farm will be utilised for cultivation of pulses and other food crops. For achieving this objective lands lying at the edge of desert will be levelled and reclaimed after cutting off standing wild trees. The cultivation of pulses and food crops will fulfil nutrition requirements of the inhabitants and their livestock. It will be a great support to the poor people who cannot afford meat, fish and vegetables.

The pastoral community is settled in this part of the world since time immemorial and they depend wholly solely on their livestock. A large number of cattle heads will be found in both Nara and Achhro Thar. Cattle raring are predominantly the chief occupation of the desert dwellers. Livestock is an asset for poor farming households. Animals fulfil their needs as they sell out their animals in case of emergency and spend it on medical treatment, marriages and other necessities.

SDF will focus their attention on increasing production of milk and meat. Livestock management trainings will be imparted to herders. A different livelihood, especially relating to land and its resources which include Flora Fauna, forms the major business of majority population. The women folk will be encouraged and informed to develop kitchen gardens and fulfil household requirement of food.

Small growers will be trained in best agriculture practices. A comprehensive guide line will be provided to growers for properly and economically utilising their lands for maximum profit.

Community Seed banks will be established at local level so that farmers hold an easy direct access to certified seeds. The people who will manage seed banks will be trained in advisory services as well.

Reclamation of saline marshes and surface lands will be under taken to cultivate pulses and other food crops in order to overcome food and fodder insecurity in white desert region. Saline agriculture will be introduced and farmers will be trained and linked up with line departments to encourage them to plant saline resilient varieties of food crops.

Efforts will be taken to organize, train and motivate small farmers for launching agro based industries for value addition with agricultural and livestock production. SDF will explore possibilities of installing desalination plants that will supply water for agricultural purposes.

Poultry: Egyptian hens will be arranged and distributed among the farming households to increase egg production. The farmers will be mobilized to encourage their children to use eggs for maintaining nutrition level required. Livestock farmers’ enterprise groups will be constituted and organized. Innovative approaches will be adapted which include modern, scientific livestock management practices and to link them with line departments for technical support and guidance. All available marketing options will be explored in which value adding method will also be adapted. Farmers will also be linked up with public and private institutions to avail services available with the said institutions.