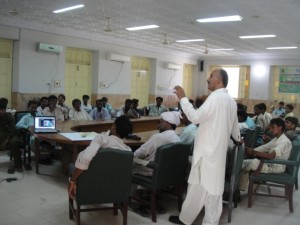 At the time establishment of SDF there were only a few NGOs working in the district and there had been a wide gap between the services and the recipients. Lack of awareness about the problem and its remedies and it was the sole result of ignorance/illiteracy. The people realized the problems but did not know how to resolve them and who will help them resolve their problems.

Soon after its founding in 2004, SDF started visiting villages in the neighborhood of wetland area and sensitized the dwellers about the impacts of the situation that they faced due to lack of awareness and proper guidance. SDF succeeded in mobilizing community and organized them under Community Based Organizations (CBOs). SDF not only formed CBOs but also built their capacity by holding detailed informal meetings, dialogues, awareness seminars and trainings on different themes. Prior to this people were mostly disorganized and their isolated efforts could bear fruit and they required a forum to give expression to their problems and challenges.

A journey from an individual to an organization:

The founder of SDF hails from a pastoral cum agrarian society that had its origins in the neighborhood of Chotiaryoon Dam and Makhi forest area. During the land acquisition process for the construction of Dam the lands of four major communities came under the dam. Mangrio tribe of Sama lineage that was settled in the vicinity of Chotiaryoon lost their lands and its resources. The construction of Dam proved quite destructive to the Natural environment of specific wetland with different characteristics and topography. The dam destroyed agriculture and livestock sectors and also badly affected Natural environment together with the destruction of five livelihoods of four major tribes of Chotiaryoon dam area such as agriculture, livestock rearing, fisheries, peasantry and labour.

Since the founder of SDF was himself a victim of dam as their entire business of life was destroyed with the construction of the dam. The people whose lands and resources came under the dam formed an organization called Anjuman-e-Mutasireen Chotiaryoon Dam” Organization of affected people of Chotiaryoon Dam (AMCD), that started a movement for rehabilitation and resettlement of affected people which was spearheaded by a few individuals with vision and commitment and succeeded in acquiring support of other organizations/institutions. The founder of SDF became a member of AMCD and pleaded the case of affected communities through media campaign, contacts with likeminded organizations and meetings with other stakeholders, proved successful and Pakistan Institute of Labour Education & Research (PILER) organized a seminar in Karachi and invited AMCD to send their representative to present a case study regarding the impacts of dam on people, land and its resources. Mr Abdul Majeed Mangrio was nominated to represent AMCD and present the case study in the seminar. The case study was so much effective that it get the public opinion mobilized in favor of local organization pleading the case of the people affected due to the construction of Chotiaryoon Dam. In this seminar held in 1999 many organizations from the neighborhoods of wetlands had gathered at the conference Hall of PILER Karachi and read out the documents of case study. After the conclusion of the seminar a special meeting was held exclusively with the organizations that had developed case studies and presented the same in the seminar. As a result of this meeting the foundation of Pakistan Fisher folk Forum was laid and Mr Mohammad Ali Shah was nominated its first president/ CEO. PFF grew into an effective and larger organization pleading the case of fishing community. It acquired many assets and provided employment to the youth and other segments of coastal society. Prior to the founding of SDF the founder realized that an individual cannot do everything he needs personnel, logistic and financial support and it was not possible without founding an organization. Thus after strenuous efforts Sustainable Development Foundation was constituted in the year 2004 and got registered under the Societies Registration Act 1860, on 3rd of December 2008.

The interventions and successes of SDF have already been narrated in the previous pages and others will follow. SDF staff and volunteers, members of CBOs formed by SDF underwent various organizational trainings which built the capacity of staff and volunteers and gave them an idea how to properly run the CBOs & NGOs. SDF succeeded in acquiring office building of its own and also established a skill development centre.

SDF plans to enlarge the scope of its work in the days to come, In order to bring skill development centre on the way to progress. It intends to run the centre in a professional and organized manner adding more vocations and trades for example: repair and maintenance of home appliances, trainings on best and cost effective agricultural practices, tractor mechanics, plumber, blacksmith, carpenter and mason. Skill development Centre will train the women and provide raw material to produce different articles for marketing purpose. This business will help them supplement family income. The trained women will be offered work at their doorsteps. The finished goods will be eventually marketed by the SDF marketing team.

This centre will also impart trainings to small growers and tenant farmers, livestock herders on best agriculture & livestock management practices aimed at enhanced per acre yield and increase in meat and milk production.

Trainings will be arranged to train small farmers and tenant peasants on small enterprise development. The farmers’ and livestock herders’ trainings will be meant to familiarize farmers with entrepreneur approaches and methodologies aimed at reduction of input cost and maximize the profits through value addition to agricultural and livestock produce.

SDF plans to establish community based seed & grain banks to collect and preserve grains for utilizing them in catering to the food requirements of vulnerable sections of local population during emergency situations and to ensure farmers’ access to qualitative seeds. A suitable and elevated place will be identified at each village for establishing community grain bank. SDF will come into contact with provincial government through district authorities to get the community linked up with the announced relief packages as well as SDF will facilitate the organizations providing grain relief to the poor and poorer sections of village community.

SDF intends to organize trainings to the community for community based disaster risk management. Exit points for draining out flood water will be identified by SDF in coordination with local inhabitants. These trainings are meant to raise the awareness and build up the capacities of local people in preparedness, resource mobilization to face the emergencies in an organized and effective manner.

Lifesaving boats will be provided to each larger village or cluster of villages for utilizing it in rescue and relief operations during disaster/flood emergencies.

SDF intends to get existing computer centre upgraded and converted into a computer lab with advanced facilities. This arrangement will create opportunities of learning for youths.