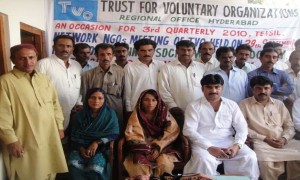 District Sanghar lies out of earthquake prone zone. Nevertheless, disasters or natural calamities come in the form of torrential rains, floods; storm and drought in Achhro Thar (white desert) adversely affect life and economy in the district. As a result of rains, over topping or breaches in the canals cause flooding in the parts of district that get the life completely paralysed. Droughts occur in Achhro Thar (white desert) temporarily and people migrate to Nara (Barrage area) along with their livestock. The weather records of past years call for an advance planning and preparedness to minimize the effects of Natural calamities. The district administration was draws up a contingency plan to face emergencies in the district. It is observed that government alone cannot hold access to each and every part of land in the district and thus needs support of all stakeholders including civil society organizations to jointly address the issues and provide rapid relief to the effected population. That is why SDF had to add a component of DRR to the list of its sectoral interventions.

SDF arranged trainings for their staff, volunteers, members or CBOs and other organized bodies in and outside the district. To raise the awareness of people about Nature, causes and impacts of disasters. The trainings or supposed to build up the capacity of social actors in advanced preparedness to mitigate the effects of disasters, especially in rain, flood and drought in white desert. SDF organized 30 awareness sessions on DRR in taluka khipro, Achhro Thar, Chotiaryoon, Sanghar and Sinjhoro in which 860 participants including 458 male and 402 female villagers got awareness about disaster risk management at community level. The awareness sessions built the capacities of people and gave them an idea as to how this situation is managed at community level.

SDF had formed a survey team to conduct 5 years drought assessment in white desert, team members visited 120 villages right from the western edge to the northern and eastern most extremities within the administrative limits of the district Sanghar. The drought assessment revealed that the drought had adversely affected local economy and people lived a miserable life with various challenges to face.

In 2011 rain flood emergency, SDF had helped establish relief camps in the affected parts of the district and coordinated relief operations in the district. In the year 2011 SDF under took rescue operations and got the stranded people shifted to the safer places. SDF Distributed different nonfood items which included mosquito nets, cloths, first aid box, water cooler and household utensils to the affected households who were temporarily accommodated at government buildings, embankments of canals and heaps of clay. Thus SDF’s rescue operations benefitted total number of 25800 including.11105 women, 10690 men and their 4005 children directly.

Before rescue and relief operations SDF had conducted rapid assessment of rain flood affected people in 5 Union Councils of taluka khipro and Sanghar of District Sanghar. As a result of rapid assessment and production of report by SDF, district government provided support to the affected population. The report was shared with other organizations for catering to the rapid and varying needs of the people. District government recognized the efforts and services rendered by SDF teams during rain flood emergency and gave them an award for best social work in the district. The post rain scenario called for an effort to identify the vulnerable or worst affected parts in the district which were still sub merged in rain floodwater. SDF identified issue of standing rain flood water in different villages of union councils Shah Sikanderabad and Chotiaryoon having population of over 60,000/ souls. SDF arranged visits of teams of district government and media representatives to the affected areas. District government mobilized the machinery and sent the pumps for draining out the standing rain water thus water was drained out and life came to normalcy.

SDF intends to set up information dissemination centre at Sanghar with its networks in different parts to provide prior information about drought and disaster. The centre will to the multiple information nets of the population about climate change and weather effects. It will also help farmers inform about weather forecast and climatic changes occurring here and the surrounding districts. It will also provide information about crops, animals’ diseases and remedial measures including water distribution, rotation announcements etc. Trainings will be organized on disaster risk reduction in all tehsils of the district.

SDF intends to train rural people to establish community grain banks to save grains to be used during emergency situations and support vulnerable segments of rural society to cope up with shortage of food grains. To organize and train people to launch savings in cash and deposit the same in a bank account as they can use saved amount to cater emergency situation.