Due to lack of information and awareness about the diseases, poverty, lack of access to proper health services and also lack of interest and care of any kind is almost nonexistent in remote rural localities and people suffer from different ailments. 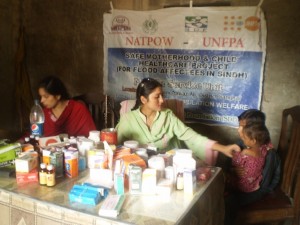 Health is an important theme of SDF interventions. In order to assess the effects of drought on land, water, animals, plants and people, SDF had conducted survey spanning over three months (December-2011-February2013.) in Achhro Thar (white desert). The survey team had visited one hundred and twenty five villages/Tarrs in Achhro Thar. The drought assessment report revealed that there is complete absence of health services in far flung remote areas in Achhro Thar. There was only one dispensary in entire white desert. It was established by district council Sanghar. Due to non-availability of the doctor and para medical staff, the dispensary remained closed. The people of white desert were facing great hardships and miseries owing to diseases and weakness. Transport was also one of the major challenges faced by inhabitants of Achhro Thar. Due to absence of roads and non-availability of speedy and comfortable transport the patients died on the way to civil hospital in the lap of shifting sands. The drought assessment report revealed that 3305 people in 125 villages died due to malnutrition and different diseases during last five years. The breakup of the death toll was as under:
1. 1765 children died due to diarrhoea.
2. 1250 women died during pregnancy or delivery.
3. 165 men and women died in tuber closes (T. B).
4. 112 people died due to cancer.
5. 13 other people died in other chronic diseases.
According to the assessment 2004, as well as free medical camp report, 12034 patients were suffering from various diseases. The common diseases identified related to mother and child health, night blindness, tuber closes diarrhoea, hepatitis B and C, anaemia and other diseases.
Safe and sweet drinking water was also a problem in white desert. Due to lack of rain and general scarcity of surface water as none of the irrigation canals pass through white desert, people rely exclusively on wells. Wells produce saline or brackish water that is not fit for drinking purposes because during black droughts the underground water table drops and salts and different minerals miserable for human, animal and plant health add into water and caused diseases among human, plant and animal populations.
Pakistan Council of Research in water Resources and other organizations visited Achhro Thar. Three delegations visited two most affected villages in white desert and identified that the situation that obtains there was alarming as continuous use of arsenic water had adversely affected health of the inhabitants. The delegations took samples of water, hair and blood of the patients for laboratory investigation.
The reports of samples revealed that arsenic water is responsible for various diseases among the residents of the affected villages. It was reported that 11 people died in those two villages where people used arsenic water.
The findings of the drought assessment were shared with print and electronic media to high light the issue and to invite attention of public and private sector institutions to the issue.
The result of advocacy, coordination of NGOS and media as well, resulted in the visit of Director General Health Services Sindh who issued directives to district health officer and medical superintendent Taluka hospital Khipro and all concerned to specifically focus on treatment of diseases and discourage use of arsenic water. Director General Health services Sindh and other visitors recommended that filter plants may be installed at all central locations where wells produce arsenic/saline water. Printed material like pamphlets, booklets was distributed among the local people. The overall situation of health was almost same everywhere in the villages in Achhro Thar as in Nara (Barrage area).
There is a wide gap in health services. SDF tried to bridge the gap so that the inhabitants could hold an easy access to standard health services by raising awareness of people about the available options and how to access them. SDF staff and volunteers conducted meetings with villagers and organized awareness seminars to mobilize and organize people as they can have effective access to the available health services.
SDF has successfully implemented the MSU –for Safe Motherhood and child Health Care Taluka Jam Nawaz Ali, District Sanghar and provided the care facilities to 4340 patients during flood 2011. The detail is as under:

SDF believes that if a person is mentally, spiritually and physically fit s/he deems to be a healthy person. SDF has plans to launch a health education programme focused on mother and child care, birth spacing practices, women sexual and reproductive health rights (SRHR). Excessive work load, poor diet, frequent deliveries render women mentally, spiritually and physically weak and eventually get sick and thus they are unable to give proper attention to their personal health and hygiene and proper care of children. Cultural trends are reducing girls’ access to nutrient diet thus the girls grew as physically weak women who give birth to weak or dead child or sometimes the miscarriage is happened. SDF’s health education programme is aimed at awareness raising, education, training and mobilization of men and women in remote rural localities about preventive and curative measures against fatal and chronic diseases among women, men and children. The community will be mobilized to ensure their access to public and private health services and demand their just rights and hold government functionaries accountable for provision of health services. SDF aims to impart TOTs on preventive and curative cost effective methods to be safe from chronic diseases and the participants would be required to replicate the training at village level. SDF aims to launch an advocacy campaign for bringing about noticeable improvements in the nature and status of health services available for general public and to make arrangements for effective management and monitoring.