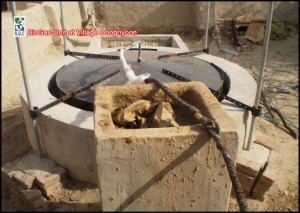 District Sanghar has always been a famous for its Natural resources and biodiversity. Chotiaryoon Dam occupies an area of 18000 hectors. Following dehs (revenue villages) came under the dam: Makhi, Hernathrri, Bakar, Akanwari, Khanwari, Mitharriyo and Dubi-2. Chotiaryoon wetlands were flanked by Makhi forest where large quantities of honey were found. Chotiaryoon reservoir is located in the north east of Sanghar at a distance of approximately 35 kilometers from Sanghar town. Historically it has been the habitat of rich flora fauna and terrace trial and aquatic echo systems of lake, forests, farm land, shallow marshes and deep water, sustained life within the circumference of sand hills.

Hundreds and thousands of households depended for their livelihoods on 405000 acres of land with different topographies and bio diversity. Prior to the construction of embankments (dikes) around Chotiaryoon reservoir (northern dike, 19 kilo meters long, western dike 14 kilometers long, southern dike 16 kilometers long and south eastern dike 9 kilometers). The area was rich in everything. The geographical area facilitated different occupations for a larger no of pastoral communities of the area. The people who were settled in this area lived a happy and content life. They had access to almost everything they needed. The people who lived in Chotiaryoon and Makhi forest had also several engagements in subsidiary occupations. Agriculture, livestock, forest, fishery and labour were major occupations. There were more or less one fifty lakes, Bakar and others were major lakes that produced larger quantities of different fish species and water vegetation below water surface. The former lakes were shallow as compare to the dam because under water vegetation was cleared for making dam.

The dam has brought many changes. It provides water during off season to Nara Canal. Nara gets water from dam and irrigates lands along both sides of Nara, Khipro and Umerkot tehsils of Sindh. The rehabilitation and resettlement of the local inhabitants of Chotiaryoon was a herculean task and it was not possible for government and private organizations and institutions to immediately restore the livelihoods because they were destroyed right at their origins. The uprooted people were resettled in other parts of Chotiaryoon.

SDF had its base in the dam area and it started its work hectically by sensitizing and mobilizing local people. SDF contacted various organizations for addressing the issues of livelihood and bio diversity. Different Organizations came to help the affected people of Chotiaryoon reservoir area in order to restore their livelihoods and embark upon new initiatives aimed at socio-economic uplift of the affected villages in the close proximity of Chotiaryoon reservoir.

Installation of water Filter Plants powered by solar energy and Hand pumps: 500 gallons of water to the village communities 350 households are being benefitted from the essential need fulfilling facility. In addition to this fifty hand pumps were also installed in Shunao Faqir Umrani & Dogriyoon Bhit villages from which 350 households are holding access to safe drinking water.

A double story bird watch tower was built by SDF within CCIC Baqar. This watch tower offers a panoramic view of dam, sand hills and human habitations built on the sand Islands.

Echo tourism promotion centre has been established in collaboration with World Wide Fund for Nature (WWF) Pakistan in village Wanhiyal Magrio. Under this arrangement many services, including physical infrastructure is also provided in village so as to be able to make it to provide residential accommodation to the tourists.

There is a great room for improvement, development as well replication of the physical infrastructure and basic facilities provided by SDF in the area so SDF intends to launch an initiative to provide shelter structure to use for residential purposes.

SDF intends to establish echo tourism centre at the bank of Bakar Lake. The premises of this centre will be used to demonstrate that how the inhabitants of white desert manage available natural resources and living their socio economic life.

SDF intends to mobilize inhabitants of white desert to demand for construction of school buildings, rural health centers along with required physical infrastructure and staff at appropriate locations throughout white desert and metalled roads to link white desert with respective district headquarters.

SDF intends to develop range land plots at the edge of desert measuring at least two acres and detached sand hills spread around the dam. Here grasses, pulses and other food crops could be grown. These plots will be irrigated through solar pump or manual local irrigation arrangements will be developed. The pumps will be installed to get water to irrigate these range land plots.